The SNEC Summer Science meeting is going to take place IN PERSON on June 21, 2022. It will be at the URI Bay Campus and will follow our traditional meeting format. Abstract submission is OPEN!!! You can submit your abstract here – abstract submission will close on Friday, June 3.

SNEC held the Summer meeting via Zoom with 9 talks and a keynote speaker. Check out the program here. We look forward to an in-person meeting in 2022.

Registration is now OPEN. We look forward to seeing you on Zoom on June 28, 2021!

The SNEC Winter meeting is going virtual! January 11-12. Abstracts are due by Friday, December 4th and can be submitted HERE

The program is now available! HERE
The abstracts are available HERE

The two keynote speakers include: Dr. John Farrell from SUNY College of Environmental Science and Forestry talking about “Longitudinal Studies & Research on the St. Lawrence River: Ecological Change, Habitat, & Fisheries“, and Dr. Lisa Kerr from Gulf of Maine Research Institute will speak about “Climate Challenges to Fisheries Management in a Rapidly Changing Ecosystem“.

Several student-focused activities will also be held, including a workshop and a student-mentor lunch. The workshop titled “Student-Professional Mixer: Preparing for Successful Recruitment as an Early Career AFS Member” is designed to connect current fisheries students with a diverse panel of professionals to exchange advice, and to give students the chance to practice their interviewing skills with people who regularly participate in the hiring process.  This is a great opportunity for students to ask the important questions regarding employment in the fisheries field! For more information about student events please contact Christopher Sullivan [email protected]

Following Monday’s conference sessions, we will have a networking dinner at the New England Aquarium beginning at 6pm. Transportation from the hotel will be available.

Three workshops will be held on Sunday January 12th that are $25 for people who register for either the 2-day meeting or just 1 day and $45 for people who would like to attend JUST the workshop. Details on workshops can be found on the Workshop page. A fourth workshop is on seaweed pressing and the cost is $50.00.

A block of rooms has been made available for $125.00 per night at the Hyatt Regency. Reservations must be made using the link below. Make your reservations as soon as you can to make sure you get the special SNEC price!
https://www.hyatt.com/en-US/group-booking/BOSRC/G-SNEC

Parking at the Hyatt garage will be available for $25/car per night. 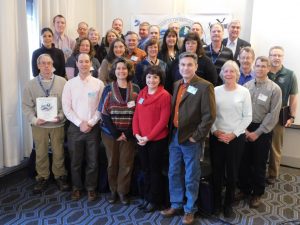 Past presidents of SNEC and NED.

For the first time in its 50-year history the Southern New England Chapter held a multi-day winter meeting and graciously did so in conjunction with the AFS Northeastern Division, creating a regional flair for the conference. The Chapter’s Golden Anniversary meeting took place during February 26-28 in Mystic, CT. The first day was devoted to two workshops and the following two days consisted of paper and poster presentations, two plenary talks, a keynote address, Chapter and Division business meetings, and various social events. Ample time was allotted for breaks and social events, which facilitated peer-to- peer communications. An off-site student-mentor lunch was also set up, allowing for professionals to give advice to future working fisheries scientists. Total attendance was 185, which included 36 students. Among the attendees were members of the AFS Governing Board, including Joe Margraf (AFS President), Ron Essig (Past President), Steve McMullin (President-Elect), Doug Austen (Executive Director), Jason Vokoun (NED President), Justin Davis (NED President-Elect), Julie Claussen (International Fisheries Section President), and Sara Turner (Emerging Leader).

Meeting workshops included “Communicating and Grant Writing for Science Professionals” presented by Rich McBride, Syma Ebbin, and Michelle Staudinger, and “Adaptive Fisheries Management” by Steve Cadrin, Katie Kennedy, and Fred Mattera. The two workshops attracted 29 participants. The Chapter would like to hold additional workshops, perhaps as soon as this coming summer. Anyone having workshop suggestions or would like to assist in their implementation should contact Bill Duffy at [email protected]

Two invited speakers gave plenary addresses, Jon Hare, Director of the NOAA Northeast Fisheries Science Center, spoke about science in support of living marine resource management in the northeastern U.S. shelf ecosystem. Ron Essig of the U.S. Fish and Wildlife Service connected significant events occurring in federal fisheries legislation over the past 50 years with each of the Chapter Presidents serving during the same time period. The keynote speaker was Julie Claussen of the Fisheries Conservation Foundation, who gave a fascinating talk on her work in Bhutan on the conservation of a large, riverine cyprinid, the Mahseer.

During the Chapter Business Meeting, President-Elect Eric Schultz noted that he is reluctantly resigning his position due to his increasing responsibilities at the University of Connecticut. The Chapter is therefore looking for a person to fill this slot as well as the incoming Secretary-Treasurer position, now held by Sara Turner, who will move up to President in the officer progression. Because the 2017 Business Meeting was held at this winter meeting rather than at the upcoming summer meeting, an electronic vote for the election of these two officers will be held sometime this spring. Anyone interested in being nominated for either of these two positions is urged to contact a member of the Chapter’s Board of Directors. 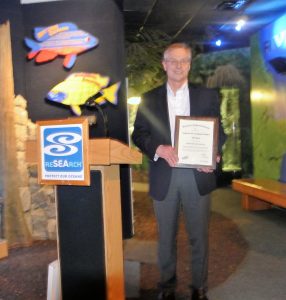 Bill Hyatt received the Chapter’s Award of Excellence for his distinguished career and achievements within the CT DEEP Bureau of Natural Resources.

Brent Schirmer, President of the UConn Student Sub-chapter reported on their activities, including plans to host a “Fishy 5K” on campus in April (with the hope that advisor Jason Vokoun will run in a fish costume). Matt Devine, President of the newly formed University of Massachusetts-Amherst Student Sub-chapter, briefly addressed business meeting attendees. This sub-unit has 21 members, including 12 undergraduates and 9 graduate students, and is advised by Dr. Adrian Jordaan. Events held so far have included “Life in the Day of a Fisheries Scientist”, which was  presented to 5th grade students. The student chapter is looking forward to holding a children’s fishing derby, assisting in stream clean-ups, and hosting a fisheries science panel night on the university campus.

The Chapter’s 2017 Award of Excellence was presented to Bill Hyatt, currently the Chief of CT DEEP’s Bureau of Natural Resources, for his lifetime contributions in all fields of fisheries science, including administration, education, management, and research. Joe Pereira of NOAA Fisheries-Milford received the Irwin Alperin Outstanding Member Award for his many years as a mentor, teacher, and sponsor to students, particularly those in high school and college undergraduates. The Lesa Meng Aquatic Conservation Award was given to Paul Ducheney and Rich Murray of Holyoke Gas &amp; Electric for advancing the knowledge of sturgeon passage at Connecticut River dams through a long-term collaborative process supportive of aquatic resource agencies goals. The Outstanding Organization Award went to the Friends of Pleasant Bay, which is an environmental organization dedicated to preserving and enhancing this biologically diverse and productive estuary, the largest on Cape Cod. Renee Mercaldo-Allen was presented a Special Achievement Award for her efforts over many years in overseeing the Steering Committee of the  Flatfish Biology Conference.  Lucas Nathan of the University of Connecticut won the Saul B. Saila Best Student Paper Award for his presentation at the 2016 Chapter summer meeting entitled “Evaluating the effects of culverts on fine scale genetic structuring of Brook Trout”. This was Nathan’s second such award in the last 3 years.

At the NED Business Meeting, Curt Orvis, recently retired from the USFWS, was presented the Dwight Webster Award for his career accomplishments in fish passage, which has benefitted the Northeast region and beyond. The President’s Award went to Margaret Murphy of the New York Chapter for all of her contributions to AFS over many years. John Cooper received a Meritorious Service Award for decades of support to the NED and its members. Justin Davis ascended as NED President with many thanks given to outgoing President Jason Vokoun. The
NED is currently looking for candidates for Vice President. Interested parties are encouraged to contact NED Pat President Kristen Ferry at [email protected]

One of the highlights of the meeting was the banquet held in the nearby Mystic Aquarium, where attendees were able to view fish and other aquatic animals from all over the world before and during dinner. And, we had a SNEC 50th anniversary cake to cap off the celebration! It appears that the multi-day meeting was very well received by all and similar meetings in the future may be considered by the Chapter. 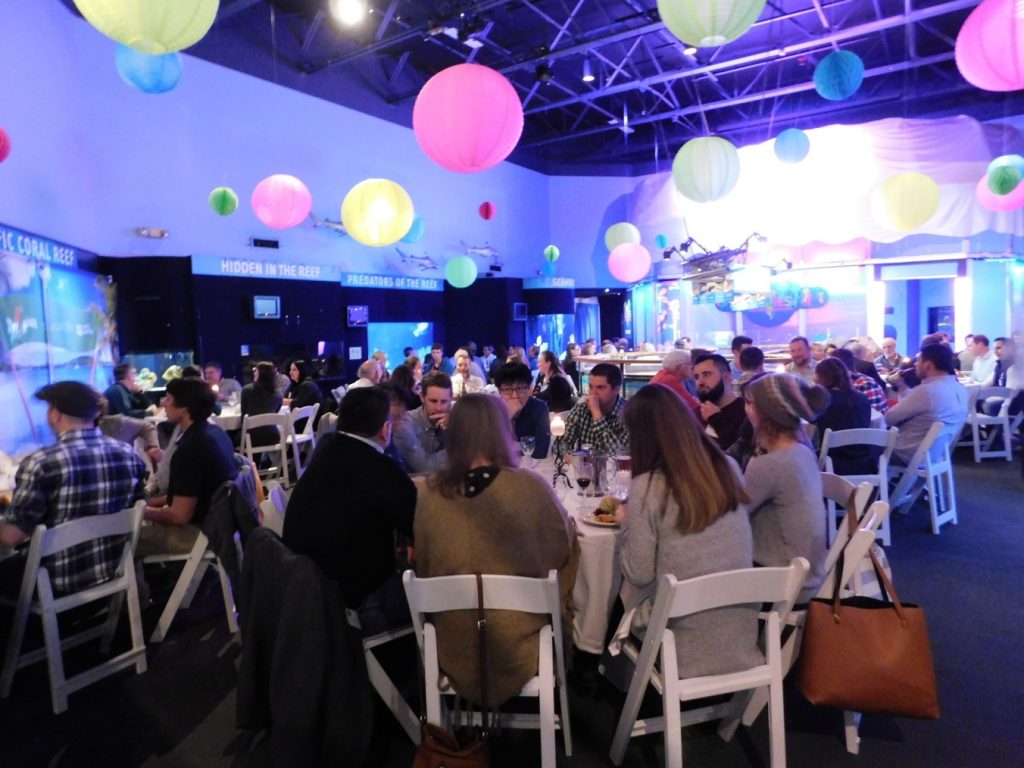 Banquet at the Mystic Aquarium

Here are the abstracts for the SNEC 50th Meeting.  Abstracts are listed alphabetically by first author and are separated by oral and poster presentations.  Entries marked with an asterik indicate a student presenter.