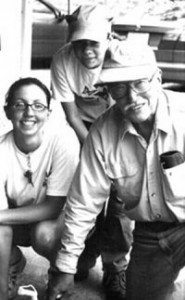 A resident of Hope Valley, RI, Saul B. Saila received a B.S. in agronomy from the University of Rhode Island, M.S. in limnology, and Ph.D. in fishery biology from Cornell University. He came to URI as an assistant professor of marine biology in 1956, becoming a professor of oceanography and zoology in 1967. He has been the major professor for more than 65 graduate students at URI and has written more than 100 papers for professional, peer-reviewed journals. Retiring from teaching in 1988, he still continues to conduct research throughout the world. Saul was the recipient of the prestigious Award of Excellence by the American Fisheries Society in 2001. This award is the oldest major AFS award and the most prestigious presented to an individual. He also received the AFS Outstanding Educator Award in 1989. In 1994, he received the Oscar E. Sette Award for outstanding Marine Fisheries Biologist from the Marine Fisheries Section of AFS.

Professor Saila has enriched the field of fishery science through innovative research and dedication to education in fifty years of professional service. He has pioneered the application of new analytical techniques in fisheries research, placing new tools in the hands of researchers that have substantially advanced the discipline resulting in more than one hundred scientific papers and reports. He was an early proponent of the development and utilization of quantitative models in fisheries applications. Recognizing the revolution that computers would bring to the field from an early date, he served as the director of the first computer center established at the University of Rhode Island, while continuing in his role as professor in the departments of Oceanography and Zoology. Modeled on the agricultural experiment stations of Land Grant Colleges, he established the Marine Experiment Station at URI. He later contributed to research areas as diverse as multispecies and ecosystem modeling, complex nonlinear dynamics, and uncertainty theory.